skip to main | skip to sidebar

Next Up: Bronze Medal

To kick off the long weekend, I came home from work to a welcome surprise - my certificate and "patch" (what ARE you supposed to do with those??) from the USDF acknowledging my USDF Rider Performance Award at Second Level!  Pretty cool, and a huge thank you to Katchi for earning me the scores for the award!  While I'm taking it day by day with Katchi's eventing plans, I have a definite next dressage goal:  the USDF Bronze Medal.  I'm just a solid half pass and flying change away (plus a whole lot better quality of work and some serious sitting trot work- yes, I realize this won't be easy!)... but it actually feels within reach. 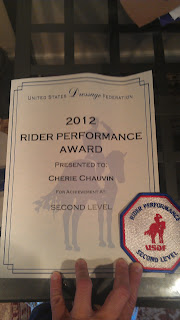 One of my big pet peeves is equestrians using technically correct language that implies something easily (purposefully) misinterpreted by other equestrians who perhaps do not have as much understanding of national and international training, competition, and award programs.  So, by way of full disclosure - my bronze medal goal is NOT for a 2016 Olympic bronze medal!  :) For now, I'll leave the Olympic medal goals to my trainers! But the USDF Bronze Medal is no less an achievement for the rest of us! For those curious, here are the official requirements:

And for those wondering whether you might set your own rider performance award goal, those awards are available for Training, First, and Second levels for 4 scores of 60% or higher at the level, from 4 judges and 4 rides, at 2 different USDF recognized shows.  Pretty solid goal... and when you reach it, then you too can have a patch that you don't know what to do with!!!

I've been a bit negligent of the blog the past few weeks - I often enjoy the blog as a place to share my excitement, disappointment, and plans... but the past few weeks, I've just been lost.  I'm still a bit lost, but feeling hopeful again.  So, it's time to write.

After Katchi's great run (and win!) in the scorching heat at Loch Moy, I let him take a few days to cool down!  And I started to put together a plan for the fall season - I could barely stand the anticipation of Silva and Phillip returning from the Olympics.  I'd put circles and stars all over August 1 in my calendar - the day Phillip said he would be flying back. I had a line-up of jumper shows leading up to a "peak" for Phillip's return.  Everything this summer was about peaking for the return of Phillip lessons!  And then Katchi did what horses do - they ruin plans.  I took Katchi out to play with some students cross country schooling at Loch Moy.  And he dumped my ass right on the ground when he hung a leg over a maybe 2'6" log.  Talk about embarrassing.  He was acting really weird and was quite convinced we should go around the log; I was half-heartedly saying 'ah, come on, jump the twig!' - we met in the middle with one front leg going around the log and one leg almost jumping it.  I hadn't fallen off a horse in probably 3 years, so I was sort of relieved to have that out of the way and to have survived!

The next day, I packed him up and headed to Leesburg to continue on our path to show jumping perfection for Phillip.  I was bruised up from my tumble, but riders have suffered through much worse!  The day was a little drizzley and the footing was holding water - not slippery but lots of splashing water.  We were scheduled for a 3'3" class followed by a 3'6" class.  Katchi's canter didn't feel great, and he was being very spooky - I assumed it was the puddles.  In the first round, we got around to fence 7, a one-stride, and Katchi stopped.  Wow, okay, we haven't done that in a while.  Jumped it the second try, but sticky.  Jumped the vertical at 8, 5 strides to oxer at 9, stop.  WHAT??  Came around again, stop.  Eliminated.  What the hell?!?!  Asked if I could try the following 3'3" class instead of the 3'6" class and the show agreed (really am starting to love jumper shows!).  Hoped over a few low fences in warm-up decently, though Katchi's canter still didn't feel great.  Went back in the ring to pick up a stop at the 2nd fence.  "Houston, we have a problem."  Time to go home, tail tucked between our legs.

It was clear that Katchi's back was really bothering him, but that's not necessarily news.  But after a few more days of light work, Katchi was clearly in trouble - just running my hand over his back (flat with light pressure), he was dropping 4-5 inches away from me.  It's sort of a bad feeling when you realize you could probably make your 1200 pound horse sit down if you just put a little strength into your finger. The day Phillip got on the plane to come back from London, we were in a bad state.  Not only was Katchi's back in trouble, my farrier pulled off his pads to find a serious stone bruise on his front foot (probably from pulling his shoe off during XC at Loch Moy a few weeks before... and perhaps a cause of his silliness at the embarrassing 2'6" log).  10 days of stall rest, muscle relaxers, and tears (his and mine!), $700 in x-rays, and a scratched Waredaca entry later... we appear to be back on track.  But on track to what?!?!  Only 2 months left in the fall season, and we're no where near fit to event.  As I try to bring Katchi back into full work with jumping and galloping, it's one day at a time... with no particular plan at all.  A strange and bizarre, and generally unlikable, feeling for me!   But I am so relieved to have my pony looking happy and healthy again.  There's nothing worse than knowing your best friend is suffering and you don't understand why.

Meanwhile, my Golightly students have been just amazing the past few weeks!!  With the return of rain, we've been getting out for quite a bit of XC schooling, and I'm really looking forward to having an awesome fall season with several students moving up a level or making it to their first big events!  It is a great consolation that even if I'm sidelined, at least I have wonderful students who really make me smile!

CALENDAR
Click HERE for the Golightly Calendar to check out our upcoming plans.

Where will you run into the Golightly gang?
Golightly Sport Horses has a new home at Trevi Manor in Lothian, MD, est. 2013.

Come say hi to us at USEA Area II, MCTA, PVDA, and other events around DC, Virginia, Maryland - and even PA!

Cherie
I never even asked for a pony! And then I got one - uh oh! Then there was school, a job, yada yada - and now I'm back! I have a "real" job that pays the bills for a REAL horse! I guess that's about the best life a horse crazy girl in her 30s could ask for.